An Introduction to Kimono - The Traditional clothing of Japan 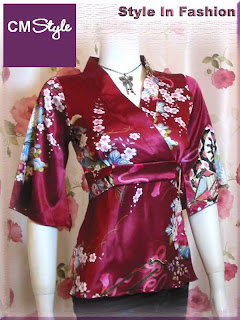 Kimono is a traditional clothing of Japan. The word "kimono" is originated from Japanese which means a "thing to wear" (ki "wear" and mono "thing").
Kimonos are T-shaped, straight-lined robes worn so that the hem falls to the ankle, with attached collars and long, wide sleeves. Kimonos are wrapped around the body, always with the left side over the right (except when dressing the dead for burial), and secured by a sash called an obi, which is tied at the back. Kimonos are generally worn with traditional footwear (especially zōri or geta) and split-toe socks (tabi).
The earliest designs of kimono were heavily influenced by Chinese clothing as the Chinese cultrure has great impact on many Asian countries in ancient times. Designs have been modified by Japanese during its developement to make them more stylish and elegant. Today, kimonos have become a high class dressing for Japanese women and are most often worn on special occasions.
Posted by cm stylist at 6:42 AM No comments: Links to this post
Email ThisBlogThis!Share to TwitterShare to FacebookShare to Pinterest
Newer Posts Older Posts Home
Subscribe to: Posts (Atom)

cm stylist
We managed an online business (www.cmstylefashion.com) selling fashionable women clothes & accessories. This Fashion Blog is to share our views, experiences, happiness and sadness with all our friends because we believe we are not just in business but in an industry to get people to dress more beautiful and attractive for a happier life!